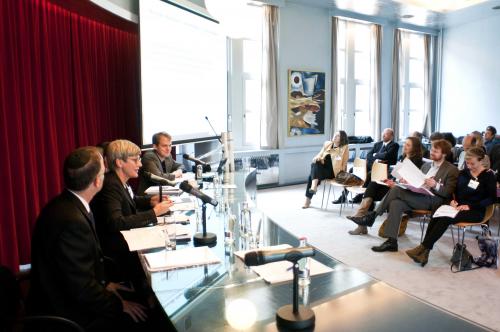 On 2 and 3 April the first General Virtual Competency Centre Meeting of DARIAH EU was held in Utrecht, the Netherlands. Tobias Blanke, one of the Directors of DARIAH-EU and member of EHRI’s Executive Team, facilitated two panel sessions. Conny Kristel, Project Director EHRI, participated in a panel with representatives from the arts and humanities research community. She gave a presentation on the overlap between the overall objectives of EHRI and DARIAH. Apart from the panels, DARIAH’s members told about the DARIAH activities in some of DARIAH-EU’s partner countries. Some 75 people from 15 European countries attended the meeting.

The EHRI consortium works closely together with DARIAH. The DARIAH project began in 2008 with the observation that just as astronomers require a virtual observatory to study the stars and other distant objects in the galaxy, researchers in the Arts and Humanities need a digital infrastructure to bring together and collaborate on dispersed scholarly resources. DARIAH is realizing such an infrastructure with a European dimension. It supports the digitization of arts and humanities data across Europe and brings together researchers, information managers and information providers. It gives them a technical framework that greatly improves data-sharing among research communities.

EHRI is a European project that aims to bring together and give better access to dispersed sources on the Holocaust. Like DARIAH it is building a research infrastructure. EHRI is not a digitization project, unlike many people think. Although it certainly supports the digitization of material on the Holocaust, this is not the initial goal. To start with, the EHRI portal will give access to descriptions of dispersed Holocaust sources, not to the material itself. To be part of EHRI, collections do not have to be digitized already. EHRI helps the Holocaust research community by bringing together dispersed sources and by supporting collaboration.

Find out more about DARIAH and what it can do for you >> DARIAH.