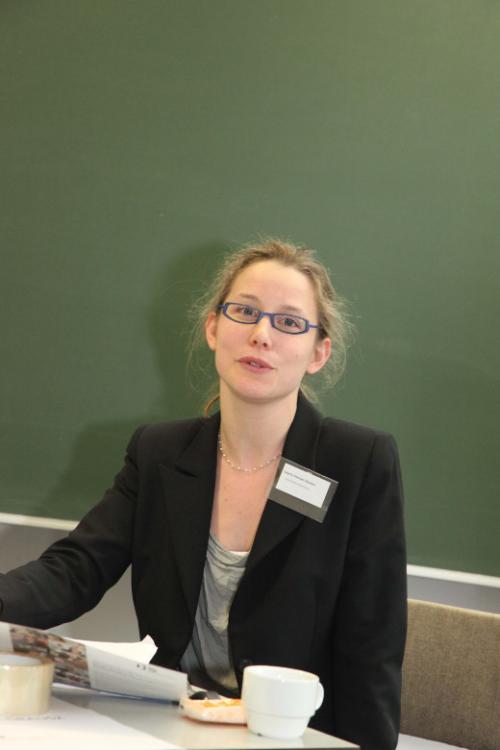 In May and June 2012, EHRI was presented on various occasions by Veerle Vanden Daelen, who is leader of the EHRI team for Identification and Investigation. On 22 May, the 5th Contact Day Jewish Studies on the Low Countries took place, organized by the Institute of Jewish Studies at the University of Antwerp. This venue brings together researchers in Jewish Studies on the Low Countries, even though presenters are certainly not limited to local researchers from Belgium or the Netherlands. It is a forum with room for work in progress and therefore this provided a good opportunity to present EHRI and its work, and to welcome feedback from the research community.

The setting was especially fortunate as Veerle’s presentation on EHRI was part of the panel 'Jewish archives on the low countries', and thus preceded by an excellent lecture by Gertjan Desmet and Pascale Falek-Alhadeff, two researchers of the Belgian State Archives, who presented the project Archival source guide on Judaism and the Jewish community in Belgium, 19th-20th century. EHRI will work in close contact with this project. The very appreciated feedback from the public depassed the context of the Low Countries, and also went into more general discussions on EHRI’s priorities and working choices.

A second presentation of EHRI followed on 11 June at the conference Prévenir et guérir dans un siècle de violence: L'Oeuvre de Secours aux Enfants par-delà les frontières, a historical conference organized on the occasion of the 100th anniversary of the Œuvre de Secours aux Enfants (OSE) in Paris. EHRI’s identification and investigation work, its fellowships, summer schools and workshops were presented to the speakers, chairs and organizers in an informal setting after lunch. The present academics from France, Germany, Israel, the United States, and Russia did not only receive the information to spread the news, but also came up with suggestions and questions, all of invaluable worth to help us develop our work in close connection to the Holocaust-researchers and the collection-holding institutions, which is – needless to say – of key importance.

Veerle gave a third presentation of EHRI on Tuesday 26 June at the meeting of the Academic Working Group of the Task Force for International Cooperation on Holocaust Education, Remembrance, and Research (ITF). All presentations increased awareness and knowledge about EHRI in academic fields as well as with archival institutions. They were good steps forward in order to increase EHRI’s visibility. This outreaching taught us not only that people are very enthusiastic about the idea of the Virtual Research Environment (VRE) EHRI is working on, they also provide us with information we otherwise might have missed. Even though we may not be able to incorporate all useful suggestions at this very moment, it is extremely important that we are aware of them, so we can include them in plans for the future.

Read more about Veerle Vanden Daelen and her work for EHRI.