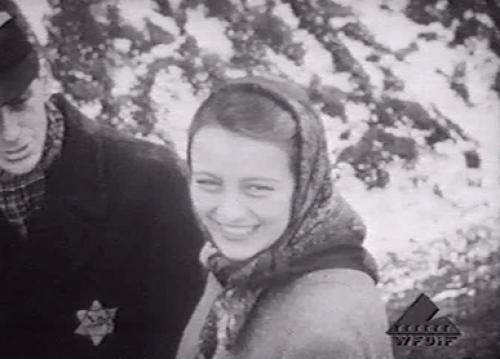 For International Women's Day 2021, we would like to highlight an EHRI Document Blog Post that is about a woman's history, Lotte Porges - The Story Behind the Photograph:

Between the years 1942–1945, three different staged films were created in the Theresienstadt (Terezín) Ghetto. Only a few short shots or fragments of the original versions have been preserved. The most famous of these became the propaganda film Theresienstadt. Ein Dokumentarfilm aus dem jüdischen Siedlungsgebiet, which became known as Der Führer schenkt den Juden eine Stadt – The Führer Gives a City to the Jews; Kurt Gerron was involved in the making of it. Employees of the Prague Aktuality office worked on the film at the end of the summer of 1944; they handed it over to the Nazis in the last weeks of the war in March 1945.

In the 1970s, Karel Margry discovered three rolls of a 16mm film in Poland that contained shots from the first Theresienstadt film shooting in the fall of 1942. It isn’t clear why cameraman SD Hauptsturmführer Olaf Sigismund shot this „film about a film“. But it reveals some very interesting information about the work on the lost film. When the exterior scenes at the building site of the Bohušovice railroad were shot, Sigismund’s camera captured, among other things, the figure of a smiling young girl with a scarf.

The EHRI Document Blog is a space to share ideas about Holocaust-related archival documents, and their presentation and interpretation using digital tools. At present it contains 60 blog posts from various authors. Visit the Document Blog.