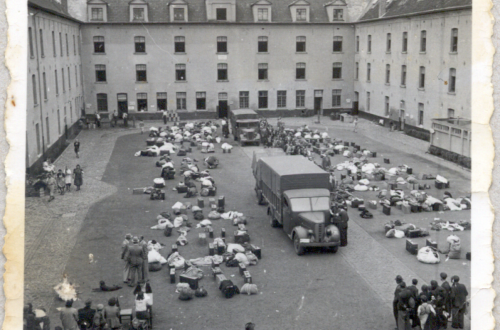 Like all of EHRI, its Online Course in Holocaust Studies resulted from international collaboration. The idea for the course arose during the early planning stages for EHRI. In its summer schools, eventually held in 2013 and 2014, a variety of specialists from various countries would train a total of 48 people.

The question was asked whether it would be good to place teaching materials online, thereby enabling more people to benefit. A search by Giles Bennett of Institut für Zeitgeschichte (IfZ), which supervised this project, confirmed the absence online of any English-language course on the Holocaust specifically aimed at junior scholars; or, more precisely (as the course page states), at teachers, lecturers, and students.

After a lot of hard work and gratefully received assistance from various colleagues, the course went first online in March 2015. There are five units or chapters, each offering primary sources, often in facsimile, and background information. Although wide-ranging, these units cannot cover the history of the Holocaust in full. Nevertheless, the makers hope that the cases are useful. Textual and visual sources continue to be uploaded and translated. (This means also that the numbers mentioned below are subject to change.)

The Ghettos and the Germans and the Holocaust

The first unit is on ghettos under Nazi rule and offers 38 sources about German and Jewish ghetto administrations, everyday life and labor, the dissolution of the ghettos, and resistance. Developed by Institut für Zeitgeschichte, its texts were written by (in alphabetical order) Giles Bennett, Andrea Löw, and Dieter Pohl. IfZ also prepared a unit on the Germans and the Holocaust with 44 sources on topics such as German society, German killers, and German Jews. The accompanying texts here are by Giles Bennett, Beate Meyer, Dieter Pohl, and Sonja Schilcher.

Thirty-six sources on the various kinds of Nazi camps are presented by Yad Vashem, alongside texts by Yitzhad Arad, Gideon Greif, Pim Griffioen, Dina Porat, Lea Prais, Therkel Straede and Daniel Uziel. The unit presented by NIOD Institute for War, Holocaust and Genocide Studies offers 47 sources on the Holocaust in Ukraine, with text by Karel Berkhoff.

Questions for instructors and students

The course title page suggests various questions for instructors and students to pose about the sources. Here are a few examples:

The emphasis on sources has resulted in the addition of various chapters with distinct discussions of source types:

Parts of the course have been used during the EHRI summer schools and in university teaching. The author of this item is increasingly assigning sections in his MA course on the Holocaust at the University of Amsterdam. Students seem to appreciate the diversity of the sources and the ability to actually see them, alongside English translations and explanations. This is exactly as intended. From the start, students ideally would learn to appreciate the linguistic dimensions of Holocaust research and the often challenging layout and appearance of original documents.

Lastly please watch this space – more online course developments are on the way.