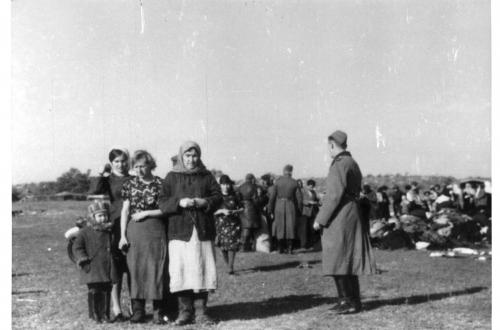 As a research infrastructure devoted to the study of genocide and war, EHRI is shocked that an unprovoked and inexcusable attack on a sovereign country is possible in Europe in the 21st century and has issued a statement condemning Russia’s recent invasion of Ukraine. It is often argued that to make sense of the present, one must understand the past. This is certainly true for the war that is now raging in Ukraine. For this reason, we would like to bring to your attention the chapter The Holocaust in Ukraine of the EHRI Online Course in Holocaust Studies, launched in 2015. Filled with source material in original languages and in English translations, and background information about sources and the historiography, it gives insights into a dark episode that still resonates today, and that is distorted by those who do not wish Ukraine well. Although EHRI’s primary impact is scientific, it also hopes that Holocaust research and a better understanding of the past, will help to build foundations for open and non-discriminatory societies across Europe and beyond.

The Holocaust in Ukraine

On the eve of World War II, about five percent of the population of the Ukrainian Soviet Socialist Republic was of Jewish descent. By the middle of 1941, there were about 2.7 million Jews in the territory of what today is the independent state of Ukraine, including the Crimean peninsula. During the German-led war against the Soviet Union between June 1941 and May 1945, some 1.5 million of these Jews died at the hands of Germans, but also Romanians, Hungarians, Ukrainians, and others. In Ukraine, only about 100,000 survived the war and the Holocaust in areas under German rule. Thus about 60 percent of Ukraine’s pre-war Jewish population was murdered—and it all was done in less than two years.

Visit the EHRI Online Course: The Holocaust in Ukraine