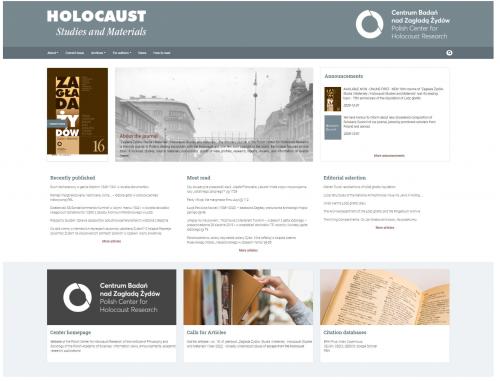 EHRI partner, the Polish Center for Holocaust Research presents a new website version of their annual journal Holocaust. Studies and Materials (Zagłada Żydów. Studia i Materiały). The website is integrated with Open Journal Systems and provides full editorial support - from submission, through reviews, editorial work, to publication of the article.

All articles (both current and archived) are available in the Open Access formula on Creative Commons license, with full access to PDF files. A full list of the issues and their content can be obtained from the Archive section. Articles are equipped with metadata (notes about the author, abstracts, keywords, DOI numbers,citation formats, and references to other texts by the same author).

In the For Authors section you will also find tips on preparing and submitting texts and Calls for Articles.

Available now and online first is  the new 16th volume of Zagłada Żydów. Studia i Materiały / Holocaust. Studies and Materials.

The main theme of the 16th issue, prepared jointly with the Center for Jewish Studies of the Lodz University is the 75th anniversary of the liquidation of the Lodz ghetto.

As the paper edition delayed by Covid-19 is slowly shifting between printing machines, the full version of the new issue can already be presented to the readers in its 'online first' formula. Connoisseurs of print and rustling pages, as well as the weight of this almost 900-page volume, must exercise their patience until the last days of December.

Publications include, for instance, Marian Turski’s testimony, Andrzej Czyżewski’s study on the historical policy of the communist authorities of Poland concerning the ghetto, Ewa Wiatr’s article about youth groups in Marysin, and Irmina Gadowska’s text about painters. Adriana Bryk discusses the history of the the postal services in the ghetto, Krystyna Radziszewska describes the lot of European Jews deported to the ghetto, Andrzej Grzegorczyk discusses the organization of the first wave of deportations from the ghetto, Jacek Walicki compares the functioning of the ghetto archives, and Sylweriusz Królak analyzes descriptions of walks in the two ghettoes. There are also articles on Viktor Hahn’s ghetto diary and Mordechaj Żurawski’s testimony.

The Łódź ghetto was established 80 years ago by the order of the German authorities. One-third of the city’s population was detained there and subjected to extermination. Wohngebiet der Jude - Jewish residential quarter - for that was how the ghetto located in Bałuty and the Old Town was euphemistically called, became the place of the ordeal of approxamitely 200,000 people from Łódź, nearby towns, and inhabitants of towns in the Reich and the Protectorate. Their tragic fate is undoubtedly one of the most important events in the social history of Łódź.

The said anniversary was a pretext for offering the readers this particular main theme of the 16th issue of the Zagłada Żydów. Studia i Materiały periodical. But this was not the only inspiration. There has been more and more interest in the Łódź “closed quarter” in the scholarly world and mass culture in Poland and abroad, which has translated into a wide range of topics discussed. This publication undertakes to present at least part of the current state of research and/or the map of the topics taken up by representatives of various disciplines. Because of the subject discussed in this issue, our editorial staff was joined by scholars associated with the Jewish Research Center of the University of Łódź, which is a co-publisher of this issue of the annual. We are convinced that this will contribute to an integration of the milieu of Holocaust scholars and will be the next step on the path to cooperation between the Warsaw and Łódź research centers

Statement by EHRI about Academic Freedom