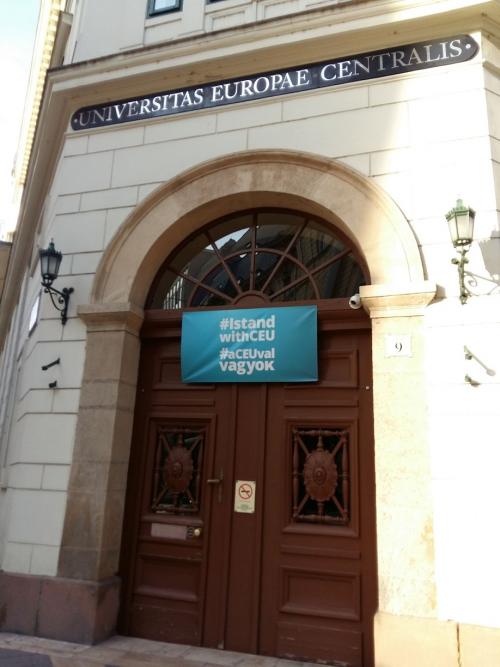 The Center for Holocaust-Studies (Munich) with the support of the Polish Center for Holocaust Research (Warsaw) organized the “Researching and Remembering the Holocaust in Central Europe” seminar held in Budapest, Hungary. EHRI had the privilege of working with the Gender Studies Department at the Central European University, who served as the on-site partner in addition to hosting the event. The week-long seminar was comprised of an international group of 20 admitted applicants coming from the Czech Republic, Germany, Great Britain, Hungary, Israel, Poland, Slovakia, Sweden, Turkey and the United States. These participants were mostly PhD candidates and early post-docs. Throughout the seminar they gained insight into new research trends and methodological challenges. Lectures, round table discussions as well as opportunities to explore the city itself provided participants an understanding of the debate and controversy surrounding the question of how to remember the Holocaust in Budapest and – more broadly – Central Europe. The seminar also provided a platform for participants to present and discuss their research and learn more about the EHRI project and its various offerings.

The seminar opened with a roundtable discussion focused on Holocaust Research in Hungary and Poland. Ferenc Laczó, Andrea Petö, Andrea Löw, Jakub Leociak and Jakub Petelewicz discussed the current state of research in their respective countries, gave insight into their own research and shared personal stories about their interest in working in the field of Holocaust studies. Afterwards, Ferenc Laczó and Jakub Leociak took an even closer look at the historiography and (often as a result) the methodological challenges in Holocaust research in Hungary, respectively Poland. While Andrea Löw and Karel Berkhoff talked about the challenges and benefits that the use of photographs present for scholarly works, Nicolai Zimmermann demonstrated how useful it is to read German documents properly – and to pay attention to details like the color of the pen used for signing these documents. Tim Cole and Alberto Giordano presented a number of examples of how the use of historical cartography and the analysis of large datasets can enable researchers to ask new questions in the field of Holocaust Studies. In their presentations on the International Tracing Service and the Visual History Archives of the USC Shoah Foundation, Ildikó Barna and Andrea Szőnyi provided two examples of major international institutions where sources crucial for almost every aspect of the Holocaust studies field can be found.

We also paid a special visit to the Hungarian National Archives, where László Csősz provided us with insights into the history of the archive, its building as well as the Holocaust related material in their holdings.

In Andrea Pető’s keynote lecture, “Paradigm Change in Holocaust Memorialization: Lessons of 70th Holocaust Memorial Year in Hungary”, she provided participants a thorough examination of the debates over commemorative practice and the politics of memory in current-day Hungary.

An excursion to the Holocaust Memorial Center along with a guided tour of the contested public space of Budapest’s Liberty Square echoed central themes of Pető’s lecture. In addition, a lively roundtable brought together a variety of community projects based in Hungary and Poland. The presented projects ranged from (re)discovering the history of a former orthodox neighborhood (http://www.budapestshul.com/history) and mapping the “Yellow Star Houses” in Budapest (http://www.yellowstarhouses.org/#), to artistic projects (http://widoczki.patrycjadolowy.pl/patrycja-dolowy/) and the development of audio-guides for the Treblinka Death Camp Memorial site (http://pamiectreblinki.pl/en/). One of the most outstanding features of the seminar was undoubtedly the screening of “1945”. The film, set in Hungary after the end of WWII, tells the story of a village community erupting with shame, rage and guilt as two Jewish survivors arrive in their midst. The impact of the film was deepened by the opportunity to discuss various aspects of its creation and resonance with the screenwriter Gábor Szántó, who also wrote the short story it is based on.

As with past EHRI seminars, the seminar in Budapest proved successful in promoting scholarly exchange, fostering a network for young researchers and offering on-site glimpses into commemorative practices.

“The EHRI-Seminar in Budapest will have a lasting impact on my research, both through what I have learned and through the friendships and contacts that all participants have acquired. The participants were in different stages of their studies, covering a wide range of topics of research, approaches and methods. This diversity itself meant a possibility to learn, and receive feedback and suggestions for one’s own research from young scholars. I also greatly appreciate the openness and willingness of the senior researchers to discuss my own work without the usual hierarchical boundaries of academia, and receive important advice and suggestions which will definitely help to better understand findings of my research. Moreover, the group enjoyed very much the possibility to get to know Budapest through guided tours, as the city framed the Seminar to some extent, visit local museums, and the National Archives. Time spent together during wonderful dinners also served as a space to discuss the talks and lectures, which triggered many interesting discussions outside the Seminar as well.” Denisa Nešťáková, Cominus University Bratislava

“The EHRI seminar in Budapest was an incredibly insightful experience. It was great to be able to meet scholars from across Europe working in this field, and to discuss our projects in depth and gain critical feedback. The programme featured a variety of activities including guided tours to museums, memorials and archives, as well as a range of guest speakers and scholars who work on a variety of important projects in the field. One of the highlights for me was the film screening of the Hungarian film ‘1945’, when the screenwriter spoke with us and answer our questions about his research and writing process. Overall, the seminar was exceptional, and I’m so glad I applied.” Hannah Wilson, Nottingham Trent University

Project Director Karel Berkhoff on What to Expect From EHRI-3