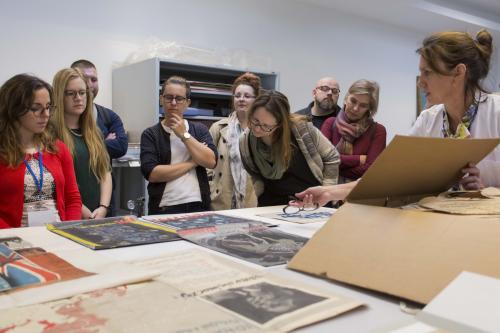 Organizer: Polish Center for Holocaust Research of the institute of Philosophy and Sociology of the Polish Academy of Sciences

For six days, fifteen researchers from eight countries (Austria, Canada, France, Germany, Italy, Israel, United Kingdom, USA and Poland) had an opportunity to discover and discuss materials from Polish archives which can be useful for scholars interested in the topic of the fate of Jews during the Second World War. The main goal of the seminar was to bring together researchers interested in working with "Polish" sources for Holocaust research, from widely known documents, diaries and testimonies to recently opened archives like post-war investigation files.

We wanted to talk about the opportunities and ways to use these materials, not only in traditional research but also combined with digital humanities. Furthermore we wanted to discuss the methodological challenges relating to Holocaust research and archival documentation.

These goals were supported by presentations, lectures, workshops and on-site visits during the seminar. The participants were able to gain knowledge about Polish archival sources not only through the EHRI Portal, but also from the main Polish institutions: the Jewish Historical Institute, the State Archives, the Institute of National Remembrance, the State Museum Auschwitz-Birkenau and the digital collections created by the Polish Federation of Digital Libraries. The lectures also discussed unknown sources – like a notebook from Ch. Rotryng’s colonial and grocery store in the Warsaw ghetto – making these a case study for methodological reflections. New approaches to Holocaust research, for example the Jewish survival strategies in Polish counties (powiat) during the war, were also discussed during the seminar. In addition to that, two NGO educators from Lublin and Oświęcim showed the participants how they used Holocaust documentation for educational purposes in their work. There was also an opportunity to have a conversation about personal experience in Holocaust research and Polish-Jewish relations in contemporary Poland. One of the main components of the program were several on-site visits. The participants had an opportunity to visit the Holocaust gallery in the POLIN Museum accompanied by its curators, were offered a guided tour to the former Warsaw ghetto area and also visited the Treblinka Museum as well as the Institute of the National Remembrance.

The seminar was a great opportunity for participants and lecturers to meet and present their research projects, to exchange and discuss Holocaust research, its sources and approaches. We found it inspiring and hope that this seminar will not only bring about new ideas for future research, but also stimulate collaborations with other scholars.