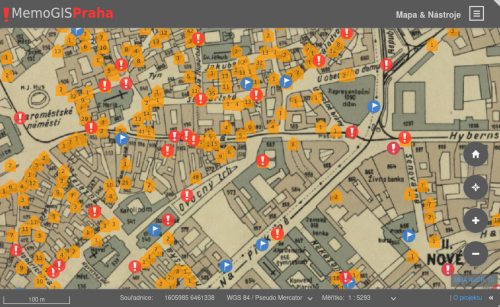 The fourth EHRI webinar of this year will feature Aneta Plzáková and Daniela Bartáková, both from the Masaryk Institute and Archives of the Czech Academy of Sciences in Prague. They are actively involved in the making of the web application "MemoGIS Prague".

"MemoGIS Prague" describes the fates of the Holocaust victims from Prague. It interprets and analyses the data gathered in the Holocaust Victims Database managed by the Terezín Initiative Institute, which contains, among other things, digitized copies of selected documents from the Prague Police Directorate's fund. By connecting historical information with the map of Prague, this application helps users to study the segregation and persecution of Jewish inhabitants through space.

In March 1939 Germany occupied (what was left of) the Czech lands, creating the Protectorate of Bohemia and Moravia, with its own government and administration under close German supervision. The German-occupied protectorate functioned up to the end of the war in May 1945.

In the Protectorate, the occupiers regarded some 118,000 inhabitants as Jews. This Jewish community had modernized and had largely assimilated with German and Czech society in the Czech Lands. In the context of rising nationalism and antisemitism, first exclusionary measures were already taken during the Second Republic (1938-39). After the occupation, the Germans, as well as the semi-autonomous authorities of the Protectorate, imposed laws and various ordinances to discriminate against Jews and confiscate their property. In autumn 1939, some 5,000 Jews were deported from Vienna and Ostrava to Nisko. Before further emigration was banned in 1941, 26,000 Jews emigrated legally and several more illegally from the Protectorate. In 1941-42 several thousand Jews were sent to the ghettos of Łódź, Riga and Minsk, where they shared the fate of the local Jewish population. In November 1941 the Theresienstadt (Terezín) ghetto was created; over 80,000 Jews from the Czech lands, but also more than 60,000 from Germany, Austria, and other countries were deported there between 1942 and 1945.

“MemoGIS Prague” contains 200 places of persecution and 1,700 cases of violations of anti-Jewish measures visualised on the city map. The presentation also points out places in the area of Prague that, for various reasons, were under the scrutiny of authorities and where the frequency of anti-Jewish incidents was higher than in other districts of Prague. During the EHRI Webinar,  Aneta Plzáková and Daniela Bartáková will address the following questions: What were the variables of these incidents? Can we understand the essential spatial dynamic behind these incidents? Is it possible to trace the motives why individuals visit particular places?

Read more about Czechia in WW2 on the EHRI Portal

You are invited to join this free webinar by following the zoom link on 7 December, 3:00 PM CET.