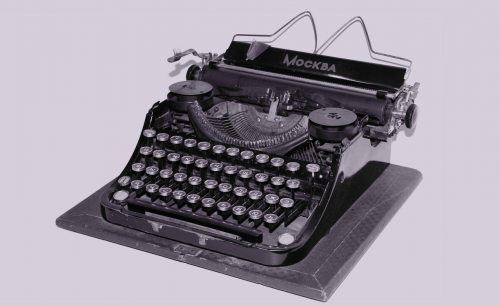 These are the first haunting lines of Babi Yar. A Document in the Form of a Novel, by A. Anatoli (Anatoly Kuznetsov), published for the first time, in a heavily censored version, in 1966 in the Soviet Union.

They are also the opening sentences of our very first EHRI Podcast episode, A Typewriter in Transit. The typewriter was used by Anatoly Kuznetsov to write his groundbreaking book. It is now part of the collection of the National Museum of the History of Ukraine in the Second World War in Kyiv.

In this podcast episode, we will talk with Karel Berkhoff, Senior Researcher at the NIOD Institute for War, Holocaust and Genocide Studies in Amsterdam, Netherlands, and Co-Project Director of EHRI. Karel will tell about Kuznetsov and the terrible tragedy that occurred at Babi Yar. On 29 and 30 September 1941, the Nazis and their collaborators murdered (by their own count) 33,771 Jewish civilians by shooting them at the nearby ravine. Kuznetsov, born in Kyiv, was fourteen years old at the time.

In 1968, Kuznetsov defected to the UK and managed to take a 35-mm photographic film with the uncensored manuscript of Babi Yar with him. The book was published in the US in 1970 under pseudonym A. Anatoli. In that edition, the censored Soviet version was put in regular type, the content cut by censors in heavier type and newly added material was in brackets. The book had great impact on the knowledge of the massacre of Babi Yar.

Listen to this podcast episode on Buzzsprout, Spotify, Apple Podcasts or on our website:

Image typewriter: Thanks to of the National Museum of the History of Ukraine in the Second World War