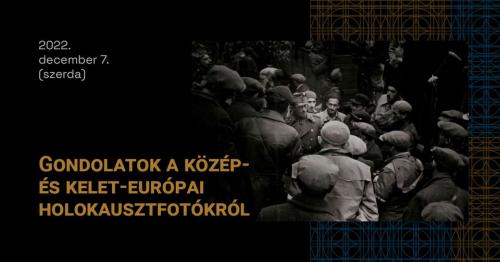 You are invited to follow online the conference Reflections on Images of the Holocaust in Central and Eastern Europe on Zoom or Facebook.

Photographs have an immediate emotional impact and can be seen as windows into past realities. They are important historical sources and priceless possessions of those who lost their families and other loved ones. Yet they are also all too often only seen as illustrations, as somehow less significant than textual and other materials.

In co-operation with the European Holocaust Research Infrastructure, the Holocaust Memorial Center in Budapest is organizing a conference to reflect on the significance of photographs of the Holocaust in Central and Eastern Europe.

Members of the EHRI Holocaust Photographs expert group of historians, researchers, museum curators, archivists and educators and several other specialists will discuss and examine methods of looking at and working with photographs from the Holocaust period – taken by perpetrators, onlookers/bystanders, Jews, resistance movements and Allied forces at the end of the war. Presentations and discussions will reflect on key questions about these images: What were the circumstances in which the photos were taken? Who took them? Why were they taken? How were the images used at the time? What was their intended use? How have they been used and contextualized since? The presentations, in English with live translation into Hungarian, will be streamed live on Zoom and Facebook.

All persons interested in the live stream are welcome to register here.

See the Book of Abstracts