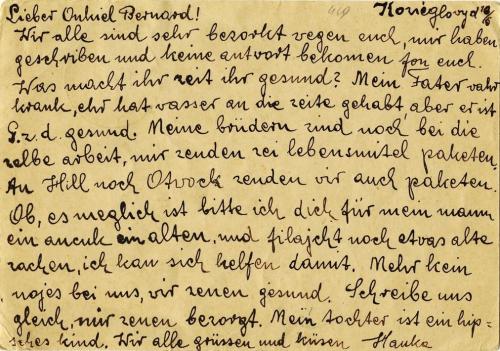 This new EHRI Document Blog post by Simo Muir describes the unknown story of parcel-sending campaigns led by Jewish families in Finland to the ghettos in Nazi-occupied Poland. By looking at the private parcel campaigns of the Blaugrund family, the post shows the significant impact that these parcels - containing used clothes, money and food - had on the lives of family members in ghettos, labour camps and in hiding. The packages brought relief to their daily struggle in dire conditions and in some cases, contributed to their survival.

Image: Hanka Szlezynger’s open letter, dated 10 June 1941 in Kozieglovy, to her uncle Bernhard Blaugrund in Helsinki. The letter is written in Yiddish-influenced German, partly with Polish orthography. Writing in Yiddish with Hebrew characters was forbidden. (Courtesy of Nena Kafka, Helsinki.)