New Issue of Forum Historiae Dedicated to “Slovak Autonomy 1938–1939: The Initial Phase of the Holocaust and Persecution” 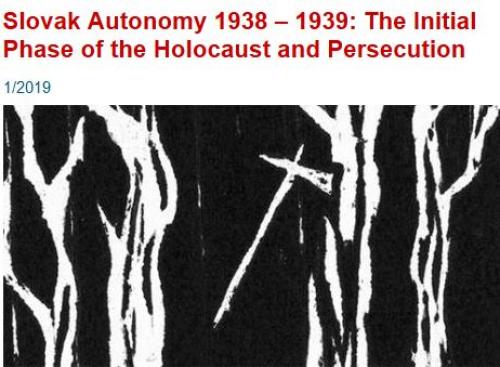 The latest issue of Forum Historiae, the semi-annual journal of the Institute of History of the Slovak Academy of Sciences, is published in cooperation with the Holocaust Documentation Center in Bratislava under the framework of the EHRI project. The idea to compose a special issue on the period of the Slovak Autonomy in 1938–1939 came up last autumn around the 80th anniversary of the declaration of the Slovak Autonomy on October 6, 1938. An ambition to elaborate more on the current progress in historical research on this particular period and to present its new perspectives resulted in publishing this journal.

Even though the Slovak autonomy lasted only for six months, it represents a crucial transition period from parliamentary democracy to the single-party system which was led by Hlinka’s Slovak People´s Party (Hlinkova slovenská ľudová strana, HSĽS). Conservative, national and Christian ideologies were enforced also by the struggle against potential enemies. In Slovakia,  the initial phase of the Holocaust had already begun by autumn 1938.

The main aim of this special issue was to bring together scholars from various fields of expertise to create a balanced content, including different perspectives of the start of the political persecution during the Slovak Autonomy. Taking into account the current state of Slovak historiography, scholars paid the most attention to the beginnings of the persecution of the Jewish minority. However, articles published in Forum Historiae clearly demonstrate that this research is still progressing and has the potential to raise new questions and apply methodological approaches. To contextualise the phenomenon of persecution under the HSĽS regime and to pay respect to its victims, articles about the cooperation of the party’s radical representatives with the Nazis, the changing role of women in society, and the legislative tools of political persecution, were also included in this issue.

In the latest issue of Forum Historiae you can read more about:

The complete issue is available online at http://www.forumhistoriae.sk/en/tema/slovak-autonomy-1938-1939-initial-phase-holocaust-and-persecution.