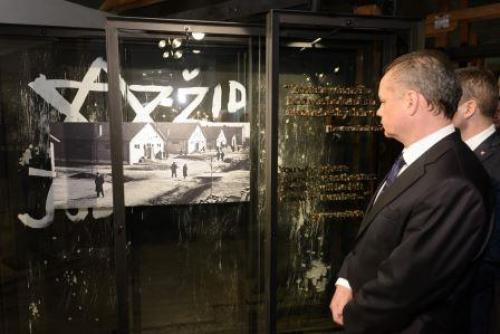 On January 26, 2016, the permanent exhibition of the Sereď Holocaust Museum in Sereď, Slovakia was opened. It is the only museum of its kind in Slovakia.

Both the place and the time of the opening ceremony were symbolic. The opening took place on the occasion of International Holocaust Memorial Day (27 January) and the exhibition of the museum is housed in a former labor and concentration camp where thousands suffered during the Holocaust.

The camp was originally founded by the Slovak fascist regime in the autumn of 1941. Along with other labor camps in Slovakia it should have been a "response" of the regime to the question of what to do with the mass of now impoverished people (about 64,000 out of 90,000 Jews living in Slovakia) who had their property confiscated during a process termed “Aryanization”.

Shortly after the start of the construction of the camp, representatives of the wartime Slovak state and the Nazi Third Reich agreed that the Jews will be exported from the territory of Slovakia to Nazi-occupied Poland. Then from March to October 1942 Slovak authorities deported almost 58,000 Jews.

During the deportations the camp in Sereď was used for the concentration of Jews from western Slovakia prior to their inclusion in specific transports. When deportations were suspended in the fall of 1942 the camp continued to serve as a labor camp. Jewish prisoners produced furniture, concrete pipes, wooden toys and many other products here. They were humiliated and beaten on an daily basis. Jewish labor camps in Slovakia were in effect prisons into which they sent Jewish people without trial. After the outbreak of the Slovak National Uprising in August 1944, hundreds of prisoners left the camp and it looked like it would be abandoned, but the German occupation forces, together with their Slovak collaborators, re-occupied the camp and started to write another tragic chapter of its history. Sereď again became a concentration camp where thousands of Jews, but also many non-Jews, were tortured. In September 1944, a Nazi “expert” on deportations, SS-Hauptsturmführer Alois Brunner took over the camp and became its commander. More than 11,500 Jews were deported to Auschwitz and various concentration camps under Brunners command from the end of September 1944. The last transport was organized on March 31, 1945.

The Sereď Holocaust Museum was created by and is part of the Slovak National Museum (SNM) - Museum of Jewish Culture. Pavol Mešťan, Director of SNM – Museum of Jewish Culture, said at the opening ceremony that creating this museum was made possible thanks to the government of the Slovak Republic, the EU Operational Program and the Ministry of Culture of the Slovak Republic. However, the Museum of Holocaust in Sereď is not fully completed and only the first part was made accessible to the public at the opening.

The opening ceremony was attended by former prisoners from the Sereď concentration and labor camp and survivors of the Holocaust from Slovakia and abroad.

The ceremony was also attended by all the highest constitutional officials of the Slovak Republic and important guests from abroad. Among others, the Czech Prime Minister Bohuslav Sobotka, the Minister of Culture of the Czech Republic Daniel Herman and the Vice-President and member of the Israeli Knesset, Yitzhak Vaknin, were present.

In his speech Robert Fico, Prime Minister of the Slovak Republic, explained that the Slovak government had provided about EUR2.7 million funding for the creation of the museum and that additional funding will be made available in the future.

In the media, one survivor, Mr. Naftali Fürst, said that the opening of the Sereď Holocaust Museum is an act that should have been done several years ago, but he was pleased that it eventually happened. We can only agree with his statement. It is good that Slovakia, which has such a painful experience of Nazi collaboration, now has a Holocaust museum.

Image 1: President of Slovakia, Andrej Kiska during the opening of the Museum, ©TASR/Henrich Mišovič

Image 2: One of the Museum buildings: a barrack of former Labor camp and concentration camp in Sered', ©TASR/Henrich Mišovič