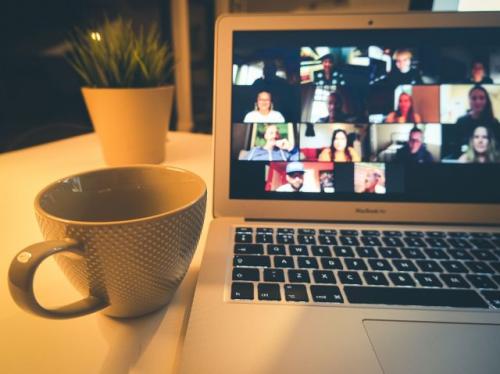 EHRI Co-Director Reto Speck was clearly pleased to see almost 70 participants on the familiar Zoom screen for the third General Partner Meeting of the EHRI Preparatory Phase Project. He started with a thank you for everyone’s commitment and for the progress that has been made even though the Covid-19 crisis has imposed difficulties for almost all involved. The last time delegates from the 25 partner institutes, located in 17 countries, met in person was over a year ago in Munich. Now most people were joining from their own homes, and in case of our colleagues in Washington D.C. at a very early hour. However, as Speck noted and as the meetings would also prove, EHRI is well on its way to become a permanent research infrastructure, which is helped by the digital nature of the collaboration, the familiarity with working together from a distance, and most importantly by the ongoing commitment from everyone involved.

Keynote Frank Bajohr: Holocaust Studies and the Need for a European Research Infrastructure

Before we dived into more detailed reports of the work done within the project, we started with a keynote that was presented by Frank Bajohr, Scientific Director of the Center for Holocaust Studies at the Leibniz Institute for Contemporary History in Germany, was entitled “Holocaust Studies and the Need for a European Research Infrastructure”. Bajohr gave a succinct overview of the development of Holocaust research in the 75 years following the war. In the early decades the focus was predominantly national, and from the perpetrator perspective, with the Holocaust presented as a German genocide, and the victims a faceless and passive mass of people. This changed in the 1970s under the influence of American politics and mass media’s attention for the Holocaust. Another boom of research and memorialization took place after the end of the Cold War. Many new sources were (re)discovered and attention shifted to the East-European killing fields and to victims as individuals. This new wave of research was also more international and had a broader, less black and white, approach. The Holocaust began to be researched as a social process in European societies under German occupation.

Several of these developments have crystallized the need for a European research infrastructure. One simple reason was that Europe lacked an integrated centre for Holocaust research with a similar reach and scope as Israel’s Yad Vashem or the United States Holocaust Memorial Museum. Other important incentives were the sheer enormity and complexity of documents and sources dispersed all over Europe and the world, the growing importance of Digital Humanities, the need for European, comparative and transnational perspectives on the Holocaust, and the lack of studies on various countries and regions, particularly in Eastern and South-Eastern Europe. Last but not least, young European researchers still feel the need for a permanent network for scholarly research and discussions. 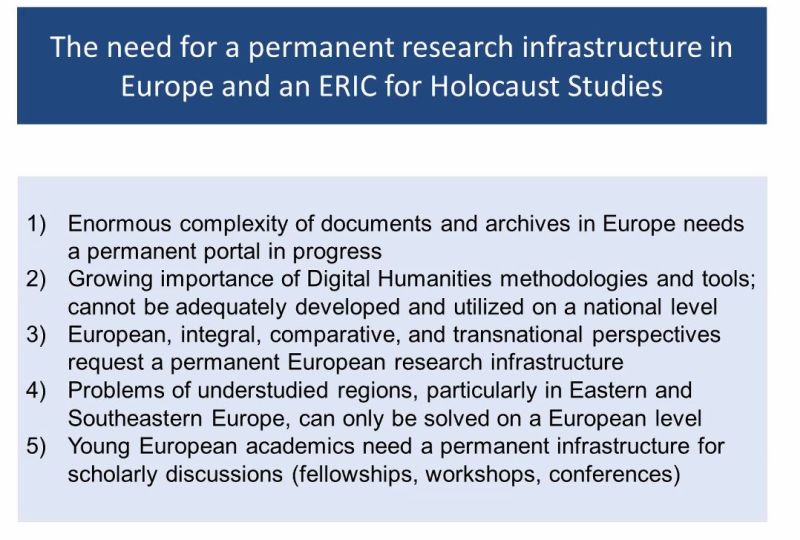 After this inspiring reminder of the reasons behind our work, it was time for more practical updates on the progress that has been made to transform  EHRI into such a permanent home for European Holocaust Research. There were short reports on legal issues, finances, sustainability, users, research and technical development, communication and implementation. More details on these aspects were presented during separate workshops where there was also room for lively discussions.

The presentations and workshops demonstrated that the legal and financial structure of the future EHRI organisation is starting to get a clear shape. The most likely legal form will be the ERIC, the EU-designed European Research Infrastructure Consortium. One point of discussion was EHRI’s future governance, and particularly, how to strike a good balance between centralisation and distribution. On the financing of such an ERIC, several possible contributions models were presented and discussed. In general, an ERIC will be sustained by fees paid by member countries. Here good progress has been made, with at least nine countries expressing serious interest in participating. The first meeting of the Board of Governmental Representatives, where every prospective member state has a delegate, has already taken place, and further meetings are planned for the future

Each country that participates in the future ERIC will also need to develop a national node, which is essentially a consortium of Holocaust-related research and archival institutions in a given country. Not surprisingly, in some countries there are many possible candidate institutions, whereas in others the institutional landscape is much more consolidated. However, after a round of updates on the situation in twelve  countries, it turned out that the forming of national nodes was progressing well, with some countries already close to reach formal agreements.

Apart from the legal and financial structure of the future EHRI, we also need to investigate the services that will be on offer. EHRI now maintains and develops several resources, such as the EHRI Portal, the Conny Kristel Fellowship Programme, the Document Blog and the Online Course, and it has a growing and dedicated user base. Several surveys have been undertaken to find out what users expect of EHRI’s resources now and in the future. Overall, respondents were very positive about EHRI’s services, but would like to see a clearer overview on what EHRI has to offer, more networking possibilities and increased online access to the sources themselves. Respondents also expected EHRI to advance trans-nationality – the writing of a European history of the Holocaust – and  interdisciplinary approaches. Users also want EHRI to keep on integrating sources that are difficult to access, and to support new perspectives and methodologies by implementing Digital Humanities tools.

Many early-career scholars are interested in a network for research exchange and professional growth. Lively discussions took place on how such a network or community could be developed and promoted. The coronavirus situation has also shown that with the help of digital tools networking can take place remotely which offers opportunities for more people to join, without needing to travel. However, many participants in the survey and in the General Partner Meeting commented that in-person meetings could never be completely replaced by digital alternatives.

After two days of EHRI meetings there was consensus that collaborating from a distance is certainly possible and actually, has not had any negative impact on EHRI’s progress. Nevertheless, there was also cautious optimism that it might be possible to hold next EHRI-PP General Partner Meeting, due to take place in autumn this year, as an in-person event.

EHRI’s Preparatory phase is more or less at its halfway point and our future permanent form is taking shape. In less than two years all the work that was presented in the meetings will result in a business plan and in all likelihood an application for becoming an ERIC. More than 75 years after the Second World War and with new challenges such as Covid-19 facing the world, a permanent European research infrastructure for Holocaust research is still needed. The EHRI General Partner Meeting showed that the participants from so many different institutions and countries remained united in that commitment.