Podcast Episode | A Petition on a Postcard 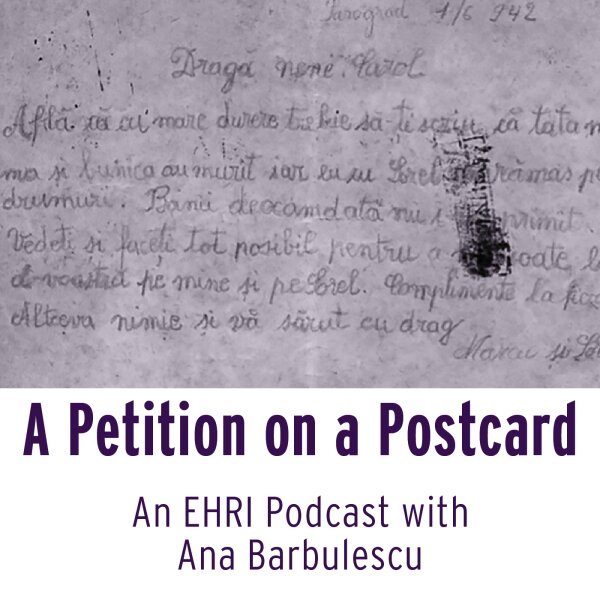 Release date: 13 October 2022 | More about the Podcast Series For the Living and the Dead. Traces of the Holocaust

In this podcast episode, we present the story of two Romanian boys, Sorel and Marcu Rozen, and a simple postcard. The Rozen family, made up of a grandmother, parents and two children, were deported from Dorohoi (a town in Northern Romania) in November 1941 to the Ghetto of Shargorod in Transnistria (now a Russian occupied part of Moldavia). Marcu and Sorel were 11 and 5 years old.

The living conditions in the Shargorod Ghetto were dire and starvation and diseases rampant. Within months after arrival, the grandmother and parents died of typhoid, the boys were left alone. Desperate for help, Marcu wrote a postcard to his uncle in Bucharest, with the message to “do everything in your power to take us out”.

This postcard is now part of the collection of The Elie Wiesel National Institute for the Study of the Holocaust in Romania, in Bucharest.

Featured guest: Ana Bărbulescu, Senior Researcher and Head of the Research Department at the Elie Wiesel National Institute for the Study of the Holocaust in Romania. Podcast host is Katharina Freise.

Ana will tell the story of Marcu Rozen and the postcard to his uncle. Listen to the episode on Buzzsprout, Spotify, Apple Podcasts or here:

Please learn what I must write to you with great sadness: that father, mother, and grandmother died, and I and Sorel have been left to roam. We have received no money. See that you do everything in your power to take us out, me and Sorel, to stay with you. Compliments to each of you. Nothing else, and I hug you warmly.

This message on the postcard found its way from the ghetto to the boys’ uncle Carol in Bucharest. Haim immediately sent a petition to the Romanian authorities in which he asked for the repatriation of the Rozen family, stating that they were born Romanians and that the grandfather had fought in the Romanian army in the First World War. When nothing happened, the uncle sent a second petition, to no immediate response either. Finally, in December 1943, the Romanian authorities decided that all Jews from Dorohoi should be repatriated from the Shargorod Ghetto. This included Marcu. For Sorel unfortunately, it was too late.

Romania in the Second World War

In the summer and autumn of 1940, Romania was pressured by  the Soviet Union and Nazi Germany into handing over disputed territories to the Soviet Union (Bessarabia, Northern Bukovina and Dorohoi), Hungary (Northern Transylvania) and Bulgaria (Southern Dobruja). The king of Romania, Carol II, was forced to abdicate in July 1940, with General Ion Antonescu taking his place as leader of the country. On 20 November 1940, Romania officially joined the Axis alliance and participated in the German invasion of the Soviet Union in June 1941. Subsequently, Romania regained Northern Bukovina and Bessarabia and also administered its own zone of occupation in Soviet territory in Transnistria.

Long before the war started, antisemitism had been on the rise in Romania, especially in the eastern territories. The situation worsened with the rise of popular far-right movements and political parties, with murderous pogroms in 1940 and 1941. The new Antonescu dictatorship implemented a policy of “Romanianisation”, discriminating against other ethno-religious groups and especially against the Jews.

On 27 June 1941, in the city of Iasi, about 13,000 Jews were killed in a pogrom planned by Romanian authorities as well as during the subsequent deportations. In the summer of 1941, Romanian and German units killed tens of thousands of Jews in Bukovina, Bessarabia and Dorohoi (territories regained from the Soviet Union). Antonescu then ordered the banishment of the approximately 150,000 remaining Jews to Transnistria, among them the Rozen family.

Thousands died on the way. In September 1943, only approximately 50,000 were still alive in the “colonies”, ghettos and concentration camps (Pechora and Vapniarka). In the summer of 1942, Antonescu began to back away from his extermination policy and mass deportations to Belzec were canceled. The Antonescu regime was overthrown in the summer of 1944, as Soviet troops began entering the country from the east. Romania declared war on Germany in late August that same year and went on to fight alongside the Red Army.

Ana Bǎrbulescu is a Senior Researcher and Head of the Research Department at the “Elie Wiesel” National Institute for the Study of the Holocaust, Bucharest, Romania. She is also an Associate Professor in the Department of Jewish Studies at the University of Bucharest. Her research interests include the social history of the Transnistria ghettos, forced labour of the Romanian Jews, antisemitism in interwar Romania, and Holocaust memory in post-communist Romania.