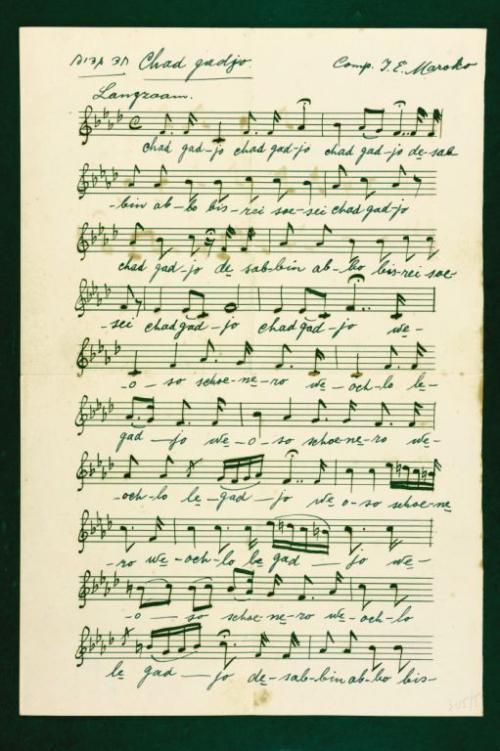 Unique manuscript shown to US President

On Friday 22 March, US President Barack Obama visited EHRI partner Yad Vashem. He visited the Hall of Names, the Museum of Holocaust Art, participated in a memorial ceremony in the Hall of Remembrance, and visited the Children’s Memorial, before signing the Yad Vashem Guest Book.

In his remarks at the conclusion of his visit, and in what he wrote in Yad Vashem’s guest book, President Obama noted how important it is that the Holocaust and the lessons that it has taught us should never be forgotten. He wrote: ‘We are ever mindful of the incredible human cost of the Holocaust- an evil unprecedented in the annals of history. And yet we recognize, through this place, the triumph of the Jewish people and the human spirit, and vow to be ever vigilant in preventing such horror from ever happening again.’

EHRI and Yad Vashem as its partner hope to contribute to this by creating an online portal that will give access to now dispersed Holocaust resources and by supporting and encouraging Holocaust research and researchers.

Yad Vashem has some 154 million pages of documentation in its archives. From this vast collection President Obama was shown a unique manuscript that survived the Holocaust: sheet music with an original composition, for the Passover liturgal poem Had Gadya, written in 1941.

This composition was written by Cantor Israel Maroko in Nazi-occupied Amsterdam. Maroko was born in Poland and had moved to the Netherlands to become Chief Cantor of Amsterdam. He composed many cantorial works, but this is the only one that survived the Holocaust. After the war it was brought to the USA by one of Maroko’s sons, Simon-Wolf. Cantor Maroko, his wife and his other children were all murdered during the war.

In 2012 Maroko’s daughter-in-law, Simon-Wolf’s widow, responded to a ‘Gathering the Fragments’ campaign and donated photos of the cantor and this original sheet music to Yad Vashem.

Maroko’s moving story is another example of the international character of Holocaust history. He travelled from Poland to the Netherlands and his music went even further, to the USA and Israel. Documents, photos and film material can be found at Yad Vashem and in the Jewish Historical Museum in Amsterdam and perhaps in other places as well. EHRI aims at bringing together dispersed sources by creating an online portal that will give access to all such collections. This way EHRI will help to support the teaching of this dark part of European history in the years to come.