Searching for life stories from World War II on Warlives.org 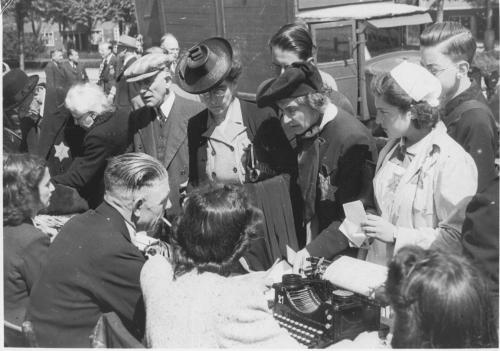 300,000 UNIQUE RECONSTRUCTIONS FROM A RANGE OF SOURCES

What did my family go through during the war?

You may now find out on Warlives.org: The starting point for research into the personal histories of Dutch WWII eye-witnesses. Never before have the individual stories of people during wartime been revealed by bringing together a large number of scattered sources.

And there will be more to come: The Dutch Network of War Collections, which initiated the project and has connections with EHRI, is continuing to add and expand timelines, in collaboration with organisations that manage sources.

This year is the 75th anniversary of the end of World War II and there is an ever-dwindling number of people who can talk about the war from personal experience. Sources are therefore essential for bringing the stories from the war to light and preserving them. But information about people’s lives during wartime is held in numerous databases and archive collections at home and abroad. Warlives.org brings together these sources to create personal timelines and thus forms the basis for research on people in World War II.

In Warlives.org a million names from some 20 different collections and databases were compared using smart algorithms. Data relating to the same person were subsequently linked, resulting in the lives of nearly 300,000 eyewitnesses to war being reconstructed. The database contains Dutch people affected by war – only victims as yet – who died during or after the war. These include prisoners held in concentration camps and prisons, victims of air raids, forced labourers, resistance fighters, soldiers, and Jewish, Sinti and Roma victims.

For example, on Warlives.org you can follow the tragic life of Hendrikus Franciscus Botterman. After Operation Market Garden, he was evacuated from Arnhem to Putten, where he was arrested in a raid in early October 1944. Following a brief imprisonment in Kamp Amersfoort, Botterman was transported to Neuengamme concentration camp and finally, together with thousands of fellow prisoners, he was killed when the ship Cap Arcona was attacked on 3 May 1945.

300,000 stories are already available, but Warlives.org is a work in progress and will continue to expand and develop.

Warlives.org is a search service of the Dutch Network of War Collections in cooperation with its partners, and it was set up with support from the Ministry of Health, Welfare and Sport, the Mondriaan Fund and the Vfonds (National Foundation of Peace, Freedom and Veteran Support). The Dutch Network of War Collections – a partnership of around 100 organisations that manage WWII sources – has the aim of making sources that are physically separated easier to find and use digitally.