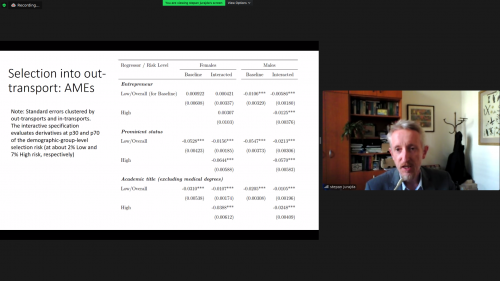 Social Networks and Surviving the Holocaust

By Michala Lônčíková, Masaryk Institute and Archives of the Czech Academy of Sciences

On March 23, a pilot EHRI Webinar was launched by our Work Package 10 (Thematic Layers across collections), the team which is also behind the EHRI Document Blog. This very first webinar, Social Networks and Surviving the Holocaust, was presented by Štěpán Jurajda, Mellon Endowment Professor with Tenure at the Center for Economic Research and Graduate Education – Economics Institute (CERGE-EI) in Prague, Czech Republic. During the webinar, he acquainted the audience with the key findings of the statistical research on the social contacts of the Holocaust survivors, that he conducted together with Matěj Bělín (CERGE-EI) and Tomáš Jelínek (Moravian Business College Olomouc).

Jurajda explored the role of having social linkages in the chance of survival of the 140,000 Jews interned in the Theresienstadt ghetto during WW2. He raised the question whether social status and personal connections determined the risk of death in the ghetto, the chance to avoid the deportation to the extermination camps and of survival in Auschwitz-Birkenau. By applying statistical methods, Jurajda and his colleagues proved the preconception, originating also from the analysis of the Holocaust survivor´s testimonies, that pre-existing social networks increased indeed the survival rate.

Another conclusion was that although social status protected internees inside of the self-administered ghetto, it did not in the extreme conditions of Auschwitz. However, entering Auschwitz with a group of friends did significantly matter. The inspiring research and a speaker from the field of economics – which, in the EHRI community, is not so common -  aroused the interest of a wider audience from various training backgrounds and sparked a fruitful discussion among the webinar participants.

For those who did not have a chance to join the presentation but want to learn more about the statistical methods and their possible usage in Holocaust Studies, a discussion paper dedicated to this research is available online here. Another contribution to the statistical analysis of the Theresienstadt prisoners co-authored by Štěpán Jurajda was published in S:I.M.O.N, the journal of the Vienna Wiesenthal Institute for Holocaust Studies (VWI), an EHRI partner in Austria.

This webinar was the first in a series of four that EHRI will be organising this year. We aim to establish a space for discussions on research projects with a relationship to Holocaust data, specific collections and digital humanities. The series is inspired by our experience during the Covid-19 pandemic, which stimulated the organisation of events in a virtual format that provided easy access on an international level. The presenters will come from the EHRI partners, as well as our wider network and EHRI Conny Kristel Fellows. The goal is to discuss ideas and projects which can stimulate further research and motivate Holocaust researchers to experiment with digital humanities. The events will welcome scholars including early career researchers from various backgrounds such as historians, archivists, digital humanists, sociologists, and geographers.

The second EHRI webinar will take place before Summer 2022. The upcoming date and presenter will be announced on the EHRI website and social media in advance. If you are interested in the next EHRI Webinar, follow the EHRI website or social media channels: EHRI on Facebook; EHRI on Twitter; EHRI on LinkedIn.

Image: taken from the webinar with Štěpán Jurajda on the right. Thanks to Michala Lônčíková.