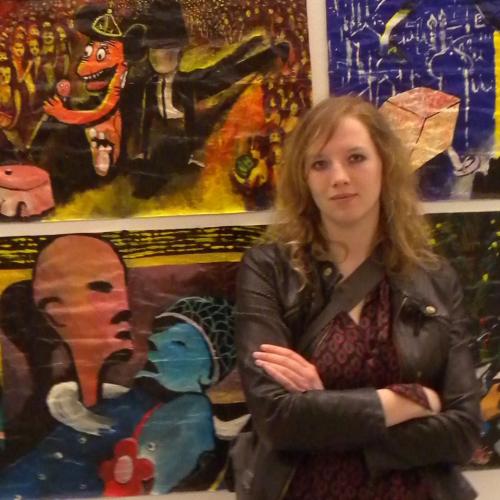 Lonneke Geerlings' PhD research focuses on Rosey E. Pool (1905-1971) – a writer, translator, and cultural anthropologist of Jewish descent born in Amsterdam. Already in the 1920s, Pool was involved in the Négritude movement, and corresponded with a number of Harlem Renaissance poets. During WWII, she became active in a Dutch resistance group. After 1945, Pool became involved in the American and British Black Arts Movements.

In 1927 Pool moved to Berlin, where she studied English Literature at the Friedrich-Wilhelms-Universität (now the Humboldt University). In this period she became involved in socialist -and probably also communist- (youth) groups. After 1933 Pool helped German Jews to flee to the Netherlands, by providing addresses where they could register. Shortly after the Kristallnacht, Pool returned to Amsterdam. She worked as an English teacher, with Anne Frank amongst her pupils. At the beginning of the war she became active in a German Jewish resistance group operating in Amsterdam, the ‘Van Dien’ group.

A large number of the Van Dien group came from Berlin, such as: Uschi Rubinstein-Littmann (1921-?), the artist Gerd Laske (1921-?), and typographer Susanne Heynemann (1913-2009). The Dutch resistance was largely founded on existing networks, built in the decades before the war (Ben Braber 1990:17; Bert Klandermans 2013). The main question of my research is therefore: how important were Rosey E. Pool’s contacts in Berlin for the formation of the resistance group Van Dien? Interwar Berlin will be regarded as a ‘contact zone’ (Pratt 1991), and I will focus on Dutch writers and activists living in Berlin during this period, as well as Pool’s German contacts within antifascist (youth) organisations and the Kommunistischer Jugendverband Deutschlands (KJVD).

Thanks to this EHRI Fellowship, I will be able to look at primary sources such as the Sozialistischer Jugendverband and the Kommunistische Internationale (amongst others), and literature from the library of the Bundesarchiv in Berlin. This will be used to construct a database of (potential) acquaintances of Rosey E. Pool, which will lead to a Social Network Analysis (SNA), using Gephi for visualisations.

I was trained both in History and Cultural Studies, and I combine these two fields in my interdisciplinary PhD research. I have presented papers on my PhD research in the Netherlands and France, and I have conducted research in the United Kingdom and the United States. Since 2014 I am an editor at Historica, the Dutch journal for gender history.

Lonneke Geerlings can be contacted at: a.j.m.geerlings@vu.nl