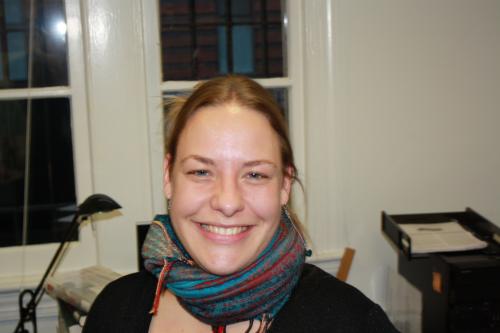 Her main research interests lie with perpetrators of mass political violence. Her current research is on peer dynamics, group cohesion, and radicalization of perpetrators of the Holocaust. Since September 2014, she has been a Ph.D. student in Modern History at Loughborough University, UK; the title of her thesis is “In Defense of Honor and Masculinity – In-Group Pressure, Violence, and Punishment in the Third Reich´s Elite, 1933-1945.” She has spoken at various conferences in the last few years, such as at the University of Amsterdam, Siena, Helsinki, and Geneva, speaking on, among other topics, the “Suicide of High-Ranking Nazis as Mirrored in the Assessment and Reaction of the Regime´s Leadership”.

In March 2016, the co-authored article, “Sexual Violence in the Nazi Genocide: Gender, Law, and Ideology” was published in an edited volume on genocide in comparative perspective (Amsterdam UP).Since 2012, she has participated in various academic summer programs in Rwanda (“Together Against Impunity in the Great Lakes Region” 2012), Poland & the USA (Auschwitz Jewish Center Fellowship 2014), and Israel (Yad Vashem Summer School 2014) – all with a research focus on mass political violence and genocide. From October 2016, she will be a fellow at the German Historical Institute in Moscow to do research at the Former Special Archives (2 months) and in the spring of 2017, she will be an EHRI fellow in Munich and Bad Arolsen to do further research at the respective archives in connection with her doctoral project.