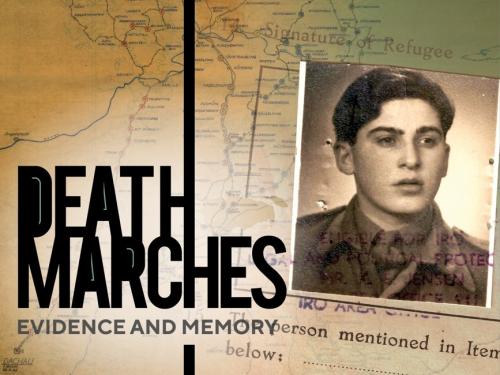 Towards the end of the Second World War, hundreds of thousands of prisoners still held within the Nazi camp system were forcibly evacuated in terrible conditions under heavy guard. Many of these chaotic, and brutal, evacuations became known as ‘death marches’ by those who endured them. They form the last ruthless chapter of the Nazi genocide, one that is little-known or understood.

The death marches resulted in tens of thousands of people dying at the roadside of exhaustion, being shot for failing to keep up, or murdered in seemingly random massacres. The victims were totally at the whim of the guards, who left a trail of blood across Europe.

These “mobile concentration camps” overturn the idea that the brutality of the camps was kept entirely separate from the German population. No one could fail to observe the emaciated, weakened inmates, the dead bodies that littered the roads, and the brutality of the SS guards. Indeed, a broad spectrum of the German population persecuted these evacuated prisoners. Some civilians shot inmates, while others refused food. Local people also denounced prisoners who had escaped from marches to the SS. While there are instances of civilians helping inmates by sheltering them in their homes, resistance was rare.

The Wiener Holocaust Library’s new exhibition, Death Marches: Evidence and Memory, will bring to light this often unknown, overlooked and understudied aspect of the Holocaust and uncover how forensic and other evidence about the death marches has been gathered since the end of the war.

Image by The Wiener Holocaust Library