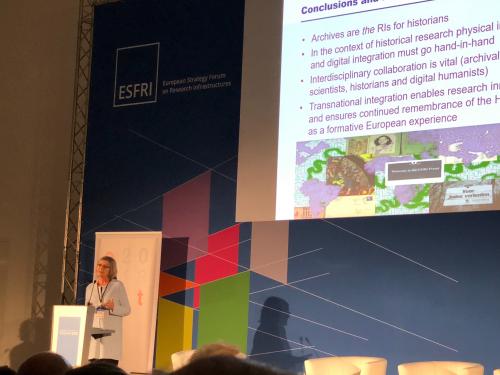 Vienna / Amsterdam, September 10, 2018 Research into the Holocaust is so important politically and scientifically that a European Holocaust research program is to be given permanent status and funding. Over the past eight years, a growing number of countries and institutions have collaborated on improving access to archives and connecting collections. Historians and archivists worldwide now use the online portal that has been developed for this purpose. Every day it becomes more evident that strengthening mutual contacts and increasing the availability and searchability of an ever growing amount of sources contributes to the innovation of Holocaust research. That is why EHRI, a European Holocaust research project launched in 2010, wants to become a permanent organization. Tomorrow, in Vienna, it will be officially announced that this 'European Holocaust Research Infrastructure' is included in the plans of Europe for scientific cooperation.

Minister
The application for placing EHRI on the roadmap produced by ESFRI - the European Strategy Forum on Research Infrastructures - was submitted by the Dutch Minister of Education, Culture and Science, Ingrid van Engelshoven. Van Engelshoven characterizes the importance of EHRI as follows:
"The unique thing about EHRI is that it links all European Holocaust archives to each other. As a result, new research can be done and more knowledge can be gathered about this dark period in our shared past. It is therefore very important that Europe decides to give EHRI a permanent status as a research infrastructure, so that historical research can continue and be further improved."

Never Again
When EHRI started the creation of an inventory of archival material in 2010, it soon became clear that its scientific efforts also fulfill an important political wish: namely that the Holocaust is a comprehensive lesson from history that must not be forgotten, especially at a time when eyewitnesses are dwindling in numbers. If 'never again' is the call, 'modernize research' provides the answer. Whenever people look for their common history, however horrific it may be, insight and mutual understanding can develop. In recent year, new opportunities for Holocaust research have been created in countries behind the former Iron Curtain, enabling us to arrive at a better view of our shared past.

Organization
With the announcement in Vienna, EHRI is placed on the ESFRI Roadmap, which provides a plan for the further scientific integration of Europe in many research areas. In this way the EHRI project will move to a new phase in which its results will be secured in a long-term European organization. Supported by individual member states, this organization will continue to support research into the Holocaust. In this year’s update of the ESFRI roadmap, EHRI is the only initiative in the humanities that has been given this opportunity. According to Dr Conny Kristel, Senior Researcher at NIOD and Director of EHRI since its inception in 2010, the great importance of the subject and the necessity of the renewal of historical research beautifully reinforce each other.

About EHRI
Research into the Holocaust depends on a diversity of archives and sources that are dispersed across the globe. EHRI facilitates online and physical access to these sources as well as methods and techniques that enable researchers and archivists to collaborate and share expertise. EHRI is currently funded by Horizon 2020, the largest European research and innovation program ever. By becoming a long-term European Research Infrastructure, EHRI’s dependence on European subsidies will be replaced by a business model in which member states jointly finance the organization. EHRI is coordinated by NIOD, Institute for War, Holocaust and Genocide Studies in Amsterdam.