Podcast Episode | A Girl and a Teddy Bear 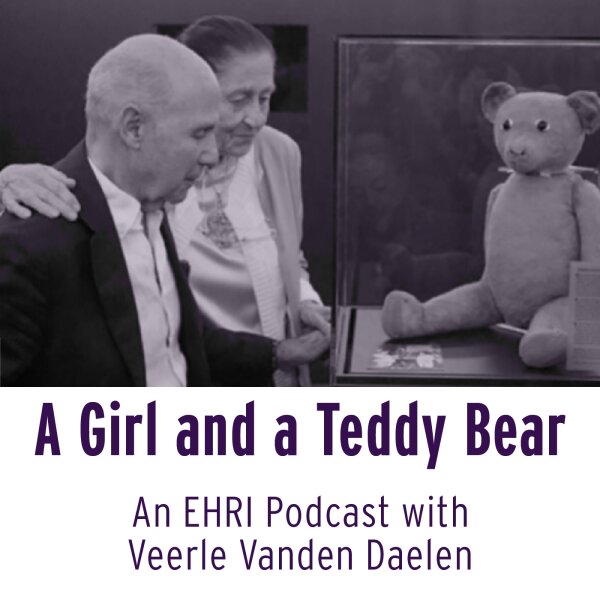 Release date: 10 November 2022 | More about the Podcast Series For the Living and the Dead. Traces of the Holocaust

In this episode we are presenting a story from Belgium, that of Norbert Vos-Obstfeld, his family and his teddy bear. Norbert Vos was still a baby when on 10 May 1940 Germany invaded and occupied Belgium. The family was Jewish and the danger to them was imminent. After an attempt to flee, Norbert’s mother found herself alone with her baby boy; the rest of her family and husband were already deported. To save her life and that of Norbert, the mother knew she had to go into hiding and she desperately tried to find a place. After several disastrous attempts, she and Norbert, almost by chance, finally found a relatively safe haven with a café-owner and his wife and daughter. It was with this family that they managed to survive the war, and that Norbert received a present from the little girl of the family: a teddy bear, a gift that he and the girl would hold on to for the rest of their lives until they donated it to Kazerne Dossin.

The teddy bear is now part of the collection of Kazerne Dossin: Memorial, Museum and Research Centre on Holocaust and Human Rights in Mechelen, Belgium, where it is one of the most beloved pieces.

Veerle will tell the story of Norbert Vos and his teddy bear, that came into the collection of the museum. Listen to the episode here or in your preferred podcast app (Buzzsprout, Spotify, Apple Podcasts, Google Podcasts):

“Once I got the teddy bear from Mona, I never let go of it during the war. I took him everywhere, he was my trusted friend, I talked to him and he looked at me with his big eyes and listened to all of my secrets…”

From an interview with Norbert Vos by Kevania Menig for EHRI 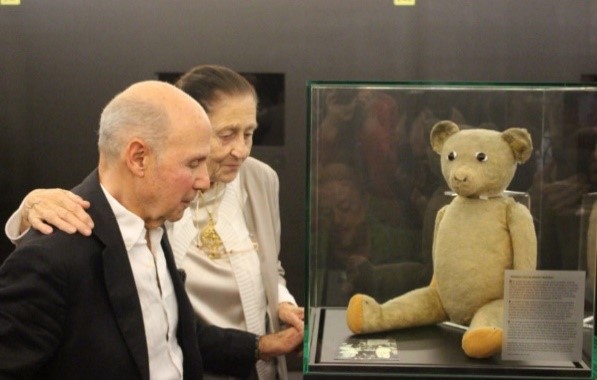 In October 2018, Norbert Vos donated a teddy bear to Kazerne Dossin in Belgium. It received its own place in a display case in the permanent exhibition of the museum dedicated to the Holocaust. At the ceremony for the occasion, Norbert was accompanied by his “onderduikzus”, his “sister in hiding”, Mona Verhage. In a speech he told the moving story behind the teddy bear. 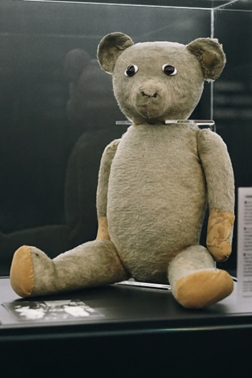 took baby Norbert and Lea into their home and gave them a small place for hiding in the attic. In doing so, they took a great risk. Mona, 7-years old at the time, thought of Norbert as her living doll. She put him in her doll’s pram and put the teddy bear in his arms. From then on, the teddy bear belonged to Mona and Norbert, “… de stille getuige van wat wij in de oorlog hebben mee gemaakt (a silent witness to what we went through in the war).”

Norbert and his mother survived the war. His father and grandparents (Lea’s parents) were murdered in Auschwitz.

For this podcast, host Kevania Menig had the honor to interview Norbert Vos, now 81, especially.

Belgium during the war

Belgium was invaded by German forces on 10 May 1940 and surrendered on 28 May under the orders of King Leopold III. The King stayed in Belgium, but the Prime Minister and many cabinet members fled to London, where they set up a government-in-exile. The German occupiers formed a military administration (for Belgium and Northern France), led by Alexander von Falkenhausen, which was replaced by a civil administration in July 1944. Belgium was liberated in September of that year, although the fighting and bombing continued in parts of the country until May 1945.

During the occupation, German orders resulted in the registration of about 57,000 Jews in Belgium, out of a total Belgian population of over 8 million. Of those Jews, 10 percent at the most were Belgian citizens; the others were mostly recent immigrants from Eastern and Central Europe. Over 90 percent of the Jewish population resided in Brussels and Antwerp. Shortly after the German invasion, the Belgian government arrested a few thousand German (and Austrian) nationals, including Jews, and sent them to camps in France. The Jews among them were later included in the deportations from France. Anti-Jewish legislation was first enacted in October 1940, while the economic plundering of the Jews began in May 1941. In April 1941, a pogrom took place in Antwerp, organized by local anti-Jewish organizations. In May 1942, the Yellow Star became obligatory. Then, in July 1942, Jews were summoned to the new transit camp Dossin in Mechelen (a town between Antwerp and Brussels) through an Arbeitseinsatzbefehl (work order). In the summer of 1942, the German police forces and their collaborators actively started looking for Jews, with large raids taking place in Brussels and Antwerp. The deportations began on 4 August 1942 and lasted until 31 July 1944. A total of 28 convoys left the Dossin camp, mainly for Auschwitz, four convoys left for other camps: one to Ravensbrück-Buchenwald and Bergen-Belsen, and two to Vittel. Overall, more than 25,500 victims were deported. The vast majority perished in the camps. 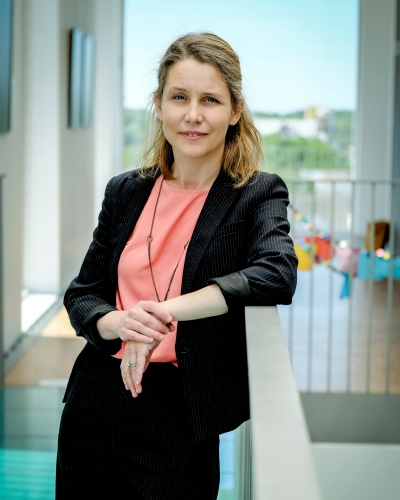 Veerle Vanden Daelen is the Deputy General Director and the Director Collections & Research at Kazerne Dossin. She has spoken to Norbert many times.

Veerle Vanden Daelen holds a PhD from the University of Antwerp. Her doctoral research focused on the return of Jews and the reconstruction of their life in Antwerp after the Second World War (1944-1960).

She is affiliated with the University of Antwerp, where she has taught “Migration History”, “Jewish History” and other classes, and where, together with Karin Hofmeester, she organises the annual “Contact Day Jewish Studies on the Low Countries” at the Institute of Jewish Studies.

Veerle is a member of the Belgian delegation to the International Holocaust Remembrance Alliance (IHRA).

Veerle is also the coordinator of the “Data Identification and Integration” work package for the European Holocaust Research Infrastructure and has been involved in EHRI almost since the start of the first project in 2010, being one its driving forces.