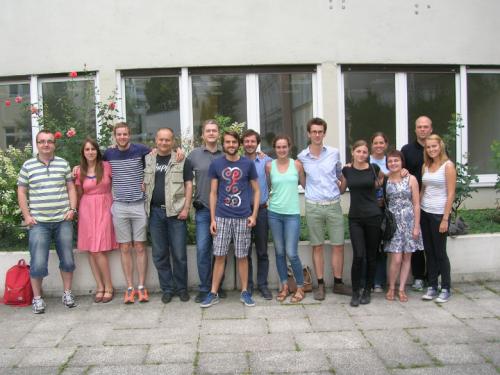 ‘I will remember the EHRI Summer School as a unique experience!’

The EHRI Summer School in Holocaust Studies is a graduate-level seminar aimed at deepening the knowledge and comprehension of the extermination process of European Jews during World War II. It also provides a comprehensive overview on the most relevant methodologies and sources as well as an update on the current state of research in the field of Holocaust history. The seminar tackles the history of the Shoah from a European perspective. It is strictly hinged on sources, the latest historiographic interpretations and the most recent research work in the field. Traditional lectures alternate with more intensive document-based work sessions and visits to important archives, museums and memorial sites.

The EHRI summer school in Paris was held between July 15 and August 2. The main organizer of the three week course was Laura Fontana, Head of the Italian Department of Mémorial de la Shoah. She consequently attended all the lectures, debates and working sessions and took part in all the excursions:

‘Although the group of participants was small (only 12 people), I took great care to invite to our seminar high-profile lecturers recognized all over the world in the academic community and coming from several countries. The first EHRI summer school had to be both for the participants and for our institution a unique experience, gathering in Paris some of the best Holocaust historians to discuss with young scholars the current state of international research on the persecution of the European Jews and especially to debate the latest findings made available over the last decade.’

The Summer School in Paris included lectures by Georges Bensoussan, Tal Bruttmann, Dan Michman, Annette Wieviorka, Paul Dostert and many others (view programme Paris) and visits to Drancy internment camp, the Maison de la culture Yiddish, the French National Archives and the Archives of the Ministry of Foreign Affairs.

‘Our participants appreciated very much visiting the national archives as well the archives of the Ministry of Foreign Affairs where some of them found primary sources for their PhD thesis and consequently were very excited about this. Both these visits generated some very engaging discussions.’

Laura’s efforts were highly valued by the participants:

'The EHRI Summer School at the Shoah Memorial in Paris was an exceptional experience that provided us with an opportunity to listen to distinguished scholars and experts working on different aspects of the Holocaust in various countries including both Western and Eastern Europe. We also had a chance to present the results of our own research and to discuss it with our colleagues. (…) The program was perfectly organized balancing lectures with visits to different institutions. The group included researchers working in different fields: history, sociology, political sciences, communication and memory studies that extended our perspectives and demonstrated how the issue of the Holocaust can be analyzed and approached using methods of different social sciences. The school also provided us with an opportunity to establish new contacts with other scholars.’ Olga Baranova, from Belarus

It was a very full programme, but fortunately there was also some time for less serious business.

‘In addition I would like to highlight less academic aspects like delicious French food during lunches and a boat trip with farewell dinner that was very much appreciated by the entire group.’ Olga Baranova, from Belarus

‘Last but not least, the EHRI Summer School was a great opportunity of individual and organizational networking with fellow participants as well as top-specialists in the area of Holocaust research. I managed to find important source materials and bibliography thanks to the help of colleagues and professors.’ Anna Susak, from Ukraine

Suggestions for improvement mainly focussed on devoting more time to the research projects of the participants themselves.

‘As a suggestion for further EHRI summer schools: along with the presentation of our own research we had on the second day, it would have been interesting to have some workshops in which to give each other more feedback on our personal research.’ Ingrid Lewis, from Romania

‘The only suggestion that I would like to advance is to make the lectures by experts shorter and to dedicate more time to questions and academic discussion as well as to presentations and discussion of our own research projects. I feel that it would be beneficial for all the participants to discuss their own research in more detail and to have more feedback from colleagues and leading international scholars regarding methodological approaches, new research and sources relevant to their projects.’ Olga Baranova from Belarus

All in all the feedback for the Paris Summer School was overwhelmingly positive. As Alexandru Muraru from Romania concluded: ‘(…) the programme was not “just” a summer school; it was a real summer research institute, with a lot of methodological and archival seminars.’

Participants of the EHRI Summer School in Paris were accommodated at Maison Heinrich Heine.

The EHRI Summer School Munich took place between July 22 and August 9, 2013. The first two weeks the participants stayed at the Akademie für Politische Bildung in Tutzing at the beautiful Lake Starnberg. The last week they were in Munich in a student’s dormitory. The EHRI Summer School in Munich was organized by Andrea Löw and Giles Bennett of the Center for Holocaust Studies at the Institute of Contemporary History. Andrea Löw:

‘For me personally it was also very important that the Munich Summer School was the first big event the new Center for Holocaust Studies at the Institute of Contemporary History conducted. The Summer School we organized took place at two different locations: the Political Academy in Tutzing at Lake Starnberg, and a week in Munich. In Tutzing we really benefitted from the cooperation with Michael Mayer from the Political Academy, it was a wonderful place to stay (even if sometimes I thought that the lake and the landscape is almost too pretty to have lectures about the Holocaust all day) and the Academy also offered great working conditions.

During the last week we cooperated with the Munich Summer School (organized by Wendy Lower for Munich University together with the Center for Holocaust Studies) which gave the participants the opportunity for even more networking: they met 12 young researchers from the USA. During the last week we also invited scholars from the US. Christopher Browning, one of the most important researchers in the field, both held public lectures as well as discussions with the students.

I really liked the mixture of our EHRI-group: we had participants from many different countries, which turned out to be very fruitful for the discussions. Everybody had the chance to learn something about the situation in the respective countries – both concerning the history of the Holocaust and the historiography with its recent developments.

The sessions I participated in included lively discussions. I was impressed by the high level of knowledge and understanding within the group. I think, the participants profited both from each other and from the lecturers. I am very happy about the positive response we got from our 12 young researchers.’

Lectures were given by Alan Steinweis, Eva Pfanzelter, Karel Berkhoff and many others. The students visited Dachau Concentration Camp Memorial Site, the Obersalzberg and several local and company archives (view programme Munich).

‘A very touching moment, at least for me, was our tour of the Dachau Memorial Site Archive where I’ve seen original documents and pictures related to the concentration camp.’ Ionela Ana Dăsculţu, from Romania

‘Field trips to Obersalzberg, Nuremberg and Dachau also broadened our knowledge about the Holocaust.’ Borbála Klacsmann, from Hungary

Many participants described the EHRI Summer School Munich as inspiring and especially appreciated the networking possibilities and the opportunities to exchange views with other students and scholars.

‘To sum up: Despite some criticism and suggestions for improvement, I was very satisfied with the EHRI summer School. It was an inspiring and challenging experience with interesting lectures by prominent scholars and rewarding exchanges with both scholars and students.’ Olof Bortz, from Sweden

‘One of the most useful parts of the program was that the participants also had the opportunity to present about their topics and the others could reflect on that.’Borbála Klacsmann, from Hungary ‘

‘In sum, the EHRI Summer School was an inspiring and amazing experience for me. I learned so much on the Holocaust and Holocaust research, and I got new insights and inspirations for my MA thesis.' Daan de Leeuw, from The Netherlands

Most students would recommend the EHRI Summer Schools to others:

‘This Summer School helped me realize what issues should be researched in my country, what type of documents related to the subject I have to look for and where. I recommend the EHRI experience especially to those who are at the beginning of the road as researchers in this field because it gives you a big impulse.’ Ionela Ana Dăsculţu, from Romania