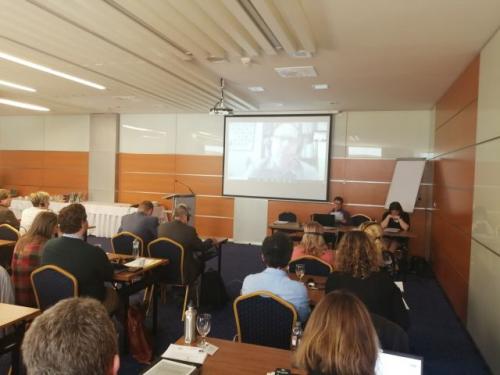 On May 3, 2022, the workshop "Holocaust in the Slovak-Hungarian Borderlands: Archives, Research and Digital Humanities" was held in Bratislava, at the initiative of the Central-European Hub, and organized by EHRI partner institutions, the Holocaust Documentation Centre in Slovakia, the Vienna Wiesenthal Instittute for Holocaust Studies, the Hungarian Jewish Museum and Archives, and Kazerne Dossin, Belgium.

The workshop aimed to present the current state of the art of Holocaust research in this specific territory.

In a 2020 interview, ethnologist and former head of the Jewish religious community in Bratislava, Peter Salner, summed up the current situation of research very well when he stated:

"What happened during World War II in the Southern part of Slovakia, I call the forgotten Holocaust. In Slovakia, we pretend that it does not concern us, because the territory was ruled by Hungarians, while the Hungarians say: it's the territory of present-day Slovakia".  (“Na juhu Slovenska máme zabudnutý holokaust” SME Domov. Accessed November 15, 2020.)

Indeed, the history of the territory of Southern Slovakia, ceded to Hungary after the First Vienna Arbitration in 1938, remains an overlooked aspect of Slovak historiography. In Hungary, the research interest on this "grey zone" is seemingly higher but, in fact, regional history has been mostly discussed in the general framework of the wartime history of Hungary, and few scholars scrutinized the primary sources kept in the Slovak state and municipal archives. Few Slovak scholars and archivists master Hungarian administrative records, whereas most experts from Hungary face the language barrier posed by the overwhelmingly Slovak research infrastructure, including finding aids and working language. Furthermore, there are collections created by Czechoslovak agencies, which hold relevance to the Holocaust in the wartime territory of Hungary. There are even examples of bilingual materials. Identifying and investigating these kinds of archival records requires extensive international cooperation.

One of the opportunities to support this type of cooperation was the workshop “Holocaust in the Slovak-Hungarian Borderlands”. During the workshop, several presentations were made, which focused on the state of current research, but also on the presentation of individual archival collections and the extent to which they can be used in the study of the Holocaust in southern Slovakia. An important part of the workshop was the so-called "EHRI Marketplace", during which individual participants had the opportunity to learn the latest information about, for example, the EHRI Portal and efforts to connect with micro-archives, but also to discuss topics related to the issue of research in the borderlands region, such as the need for a common terminology in a multilingual environment.

The workshop “Holocaust in the Slovak-Hungarian Borderlands” was one of the first workshops aimed at fostering the building of a community of experts working on the Holocaust in southern Slovakia, and we firmly believe that further joint projects will follow.