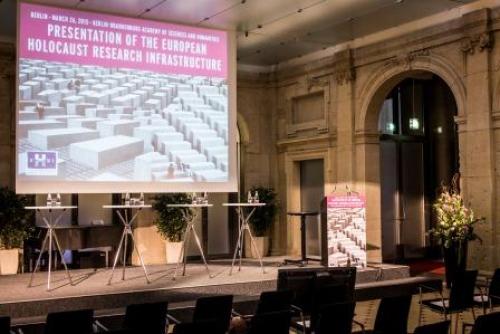 Launch of the EHRI Portal

On 26 March, after 4 years of work, the project European Holocaust Research Infrastructure (EHRI) presented its results. This presentation took place at the beautiful and befitting Berlin-Brandenburg Academy of Sciences and Humanities in Berlin.

To honour the occasion, an interesting programme was put together that featured contributions from politicians, historians, researchers, archivists, and digital infrastructure experts. The 200 guests that were in attendance mirrored the wide scope of the programme.

The day started with a press conference where EHRI Project Director Conny Kristel together with three politicians - Sander Dekker, Dutch State Secretary for Education, Culture and Science, Cornelia Quennet-Thielen, German State Secretary at the Federal Ministry of Education and Research, and Prof. Marek Ratajczak, Polish Secretary of State at the Ministry of Science and Higher Education, and Robert-Jan Smits, Director-General of DG Research and Innovation of the European Commission - stated the importance of EHRI for European society. To everyone’s delight, Robert-Jan Smits announced that EHRI will continue to expand under Horizon 2020, the biggest EU Research and Innovation programme ever.

After the press conference, the official programme began. EHRI Project Director Conny welcomed the guests and talked about her four year experience. ‘EHRI has not only been about integrating data, but also very much ... about bringing people together.’ She also explained the importance of EHRI for the Holocaust research community: ‘Astronomers have their huge telescope which is essential for their research, physicists have their impressive accelerators. And we now have the EHRI portal, a virtual observatory, which is just as essential for research – in our case Holocaust-research.'

Conny Kristel also introduced the moderator of the day, Jane Ohlmeyer who is Professor of Modern History at Trinity College Dublin, Ireland.

Aliki Arouh from the Jewish Community of Thessaloniki Archives

Then the first speaker came onto the stage. Aliki Arouh, who works for the Jewish Community of Thessaloniki Archives in Greece, held a moving and personal speech. Largely because of her own history, she is passionately involved in researching the names of all Holocaust victims of Thessaloniki. The archive of the Jewish Community of Thessaloniki was looted in 1941: ‘The destruction of the war scattered it in the wind to the four corners of the earth and, now, one must try to reassemble it like a puzzle.’ In 2012 Aliki was invited to an EHRI workshop and has ever since enjoyed a mutually beneficial collaboration with the project. ‘EHRI’s project and the development of the new portal now provide a new perspective on cooperation and endow the Holocaust research community with powerful tools.'

After Aliki Arouh, the Director-General of DG Research and Innovation of the European Commission, Robert-Jan Smits, took the floor. He announced to the assembled audience the continuation of EHRI, and formally opened the EHRI portal by starting a short film about the European Holocaust Research Infrastructure.

Next were three European politicians that honoured the event with their presence, the Dutch State State Secretary for Education, Culture and Science, Sander Dekker, Cornelia Quennet-Thielen, State Secretary at the Federal Ministry of Education and Research, Germany, and Prof. Marek Ratajczak, Secretary of State at the Ministry of Science and Higher Education, Poland. They all spoke of the importance of an initiative like EHRI and the urgency to keep on remembering the Holocaust.

The speech of Sander Dekker received an Honorable Mention from the 2016 Cicero Speechwriting Awards. Read speech.

This formal part of the programme was closed by Prof. Günter Stock, President of ALLEA (All European Academies), and of the Berlin-Brandenburg Academy of Sciences and Humanities, the venue that hosted the EHRI Presentation. He started his speech with the remark that science and research in Europe really need to cross borders. In that sense he praised EHRI as ‘(…) an example of truly open science’.

After the break, the keynote speech was held by Prof. Stefanie Schüler-Springorum, Director of the Zentrum für Antisemitismusforschung in Berlin, who talked about ‘The Future of Holocaust Research’. In her impressive speech she talked about her initial hesitations about EHRI, her fear that a specific intellectual space will get lost by providing online access to historical documents. However once she realized that EHRI was not a digitizing project, she began to see the promises the project holds for research. EHRI aims ‘… at finding a middle way by integrating existing collections and infrastructures online in order to make researchers aware of the great variety of the archival European landscape, to put especially small and hidden collections on the map of that landscape and thus make people go into the archives and not content themselves with online access and edited documentations. And it is precisely here where EHRI in my eyes has done an impressive job, by bringing to the surface the different archival and academic cultures in Europe, thus creating the necessary platform for understanding its diversity in the first place.’

During the lunchtime break, more than just food was on offer. In separate rooms, guests could watch three short films that EHRI has produced, visit a market place where EHRI partner instiutions presented themselves, explore the EHRI portal and the EHRI Online Course in Holocaust Studies, and talk to EHRI staff, fellows and summer school participants.

After lunch the atmosphere was less formal when two panels took to the stage. First, EHRI team members talked about their achievements, the successes and difficulties of making the European Holocaust Research Infrastructure.

In the second panel, Diana Dumitru from the Ion Creangǎ State University, Moldova, Elizabeth Emmerson, Chief Archivist at the International Criminal Tribunal for the former Yugoslavia (ICTY), Edyta Gawron, Assistant Professor at Jagiellonian University, Poland, Prof. Eric Ketelaar, Professor Emeritus of Archivistics at the University of Amsterdam, Prof. Dieter Pohl from the Alpen-Adria-Universität Klagenfurt, Austria and Prof. Stefanie Schüler-Springorum, Director of the Zentrum für Antisemitismusforschung in Berlin, Germany discussed the topic of open access and transfer of knowledge regarding Holocaust research. Although the members generally agreed on the importance of open access, several obstacles and hesitations were also put forward.

The successful day ended with a reception.