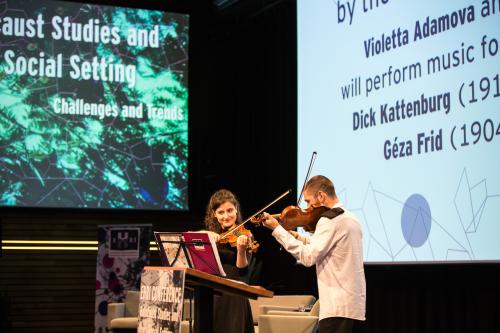 Between 2010 and 2019, EHRI organised several conferences. In 2020 we will focus on the transformation of EHRI from a project into a permanent entity. This means we will have to build a sustainable legal and financial structure and develop long-term strategies for research, training, user access, technical development and data management. Before the end of this year, depending on the COVID-19 situation, we hope to give information on several new conferences.

On this page, you can find information on older conferences.

Holocaust Studies is a dynamic multidisciplinary research field that is dedicated to the Holocaust itself but also includes aspects of the post-Holocaust world such as memory, human rights, Jewish life or international relations. At the same time, the research field has a manifest public dimension. To examine these diverse and intertwined dimensions, EHRI and its partner institution NIOD, Institute for War, Holocaust and Genocide Studies, organised two conferences in July 2019 in Amsterdam.

In recent years digital practices have had a profound effect on Holocaust Studies. From its start in 2010 the European Holocaust Research infrastructure (EHRI) has not only been stimulating, but also monitoring and studying this development (in e.g. conferences and workshops). Against this backdrop the conference Holocaust Studies in the Digital Age, What’s New? explores how digital technology influences contemporary Holocaust research in its broadest sense. Is the research field undergoing a digital transition that profoundly changes its nature?

Go to the conference webpage

For more information about the topics that were discussed, please see the the speakers and abstracts overview.

This conference focused on the importance of EHRI’s human network and the public dimension of Holocaust Studies. Renowned Holocaust researchers and policymakers, such as Wendy Lower, Dieter Pohl and Katharina von Schnurbein spoke at the conference, discussed EHRI's achievements and reflected on the interaction of Holocaust research with society at large. The programme included keynotes, round table discussions, a video presentation and a music performance. Many former EHRI fellows and workshop participants, as well as all EHRI’s partners, attended the conference and related their first-hand experiences. This conference also marked the conclusion of the second phase of the EHRI project.

Go to the conference webpage

For more information about speakers, please see the speakers overview. Here you can find a conference report.

- The Presentation of the European Holocaust Research Infrastructure (2015)

- Public History of the Holocaust: Historical Research in the Digital Age (2013)

26 March 2015
The Berlin-Brandenburg Academy of Sciences and Humanities in Berlin, Germany

On Thursday 26 March 2015 the European Holocaust Research Infrastructure (EHRI) project presented its results. One of the highlights of the day was the official opening of the EHRI online portal that provides access to Holocaust sources dispersed around Europe and beyond. While the portal is one of the key successes of EHRI, the project has also supported the Holocaust research communities in many other ways. We have organised expert meetings, conferences, fellowships, summer schools and online courses. Several high-ranking European politicians, renowned Holocaust researchers and digital infrastructure experts attended the presentation to discuss EHRI's achievements and to reflect on the impact of EHRI on the future of Holocaust research and memory.

Read more about the EHRI Presentation

In May 2014, EHRI organised an international conference on "Holocaust Documentation in Eastern Europe” that took place in Krakow. The conference was held with the aim to expand the project.

Read more about the Krakow Conference

Public History of the Holocaust: Historical Research in the Digital Age

On July 9 EHRI co-organised an international conference on the Public History of the Holocaust, that was hosted by the Jewish Museum in Berlin. Facilitated by EHRI and two other European infrastructure projects supporting humanities research, DARIAH and TextGrid, and sponsored by the German Ministry of Education and Research, the conference brought together policy makers, archival and memory institutions, and academics to reflect on the challenges and opportunities the digital age offers for the public history of the Holocaust.

Read more about the Berlin Conference

16 November 2010
The Royal Museum of Art and History in Brussels, Belgium

On 16 November 2010, The European Holocaust Research Infrastructure (EHRI) was formally launched in the presence of high level European politicians and representatives of the relevant communities in the Royal Museum of Art and History in Brussels, Belgium.

This was the official start of the first phase of the EHRI project (2010-2015) that was funded by the Seventh Framework Programme (FP7) of the European Union.